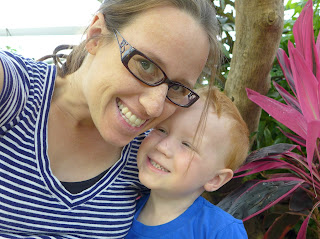 3-year-olds are hard.  They are just plain hard.  Add postpartum hormones and a new baby...Well that's just a disaster.  And the truth is, things have been strained.  There have been raised tempers, lost patience, yelling, time outs and the gamut.  And many days, I'm left with the feeling of just being a huge failure as a mom.

But then, we were presented with this lovely day.  We spent the morning with friends at the park (activities are paramount for survival).  I committed to no TV during nap time, giving me time to regroup and rejuvenate.  And the baby chose to sleep for a good long while after the 3-year-old woke.

And then, he told me he wanted to sit in my lap while we watched Octonauts.  This is a scarcity lately, as it's hard to hold a toddler in your lap while rocking an infant.  So, with the baby still peacefully sleeping, I sat him in my lap.  And instead of "multitasking" on my phone like I normally would (because really, how many times does one REALLY need to watch an animal in scuba gear save sea creatures?), I put my phone away.  I soaked in his sweetness.  I wrapped my arms around his little body.  I breathed in his scent.  And even though he smelled slightly like a wet dog (as 3-year-olds often do), I still just basked in the moment.

And then he said, "I don't wanna ever go away."  And I didn't want him to either.  And we watched those scuba diving animals save sea creature after sea creature and soaked each other in, resetting our relationship and giving us a chance to start again.

Posted by Nicole {September Sweetheart} at 2:09 PM No comments: Links to this post