My sweet boy just loves animals.  I told you before that the little guy totally loves our cats.  Up until now, he hasn't really met our dogs.  I brought him down to meet them a time or two, but he was very little and I was wearing him.  So, they sniffed his head...the end.

We have big dogs, and they don't come in the house much (not at all since Baby was born), and I'd been nervous to have them around him, since they are still somewhat young and very energetic.  But, this weekend, our friend's dog turned 10, and she had a birthday party for her.  Silly?  Yes.  Fun?  Of course!  I really wanted to bring the dogs, since they were in desperate need of some attention and a good outing. 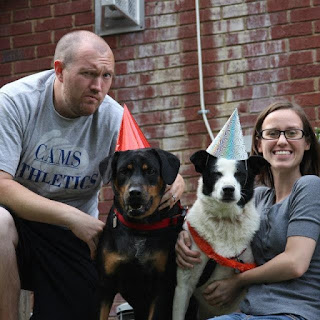 Unfortunately, Baby was sleeping when we took the birthday photos, but here is a party photo, anyhow.

We put them in the back of Brandon's Jeep.  This meant that Vinnie (who is always wanting to be in your lap, despite his near 80 pounds) would poke his head over the seat where Baby could see him.  He would coo and laugh.  Then, when Vinnie laid back down, Baby would call him, "Ah! Ah!"(He just started calling people/things this weekend, and it is so cute).

Once we got there, he was able to "play" with the dogs, and he was just thrilled.  Of course, he wanted to put their noses in his mouth.  Of course, he would get excited and start hitting instead of touching, but the dogs didn't mind.

I'm so glad that my little one loves animals as much as we do!
Posted by Nicole {September Sweetheart} at 9:24 PM