Maternity Monday- Awesome Pants and a Trip to the Hospital

I've decided to start a section on my blog called "Maternity Monday."  I will do my best to post something maternity/pregnancy/baby related each Monday.  I wanted to start this some time ago, but somehow, just never got to it. 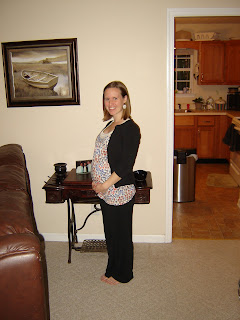 So, here we are in week 23.  Sheesh!
I ended up in the hospital last week with some extreme pain in my stomach.  I'd had this pain off and on for a while, but thought it was my ligaments stretching (something my midwife told me to expect).  However, this time, it hurt so bad, it was spreading to my back and leg.  I was literally on the ground, I was in so much pain.  So, my loving husband skipped his weekly volleyball playing and took me to the hospital.

They monitored baby's heartbeat and my small contractions (Gasp!  Should I have even been having those?!) for about an hour an a half, while I laid on the bed drinking  ice water.  Eventually, they tested a urine sample and determined that I had an infection.  I got a prescription called in, and left.  By now, about 3 hours after the pain started, I was feeling pretty normal, again.

I thought everything would be fixed with my prescription, until the pain came back after I'd been on my antibiotics for over 24 hours.  I called my midwife's office to see if this was normal, and they asked me a few questions.  After a minute, she told me she was pretty sure the baby had been sitting on my sciatic nerve, and I could convince him to move by drinking cold water (no wonder I felt so much better after drinking ice water for 2 hours in the hospital).

I'm sure I'll continue to have pain from this (I figure little guy doesn't have that many places to hang out in there, and will probably choose that location, again), but at least I know what it is, now, and what I can do to hopefully help.

On a positive note...I finally have some maternity jeans that fit!  And...I "made" them, myself! 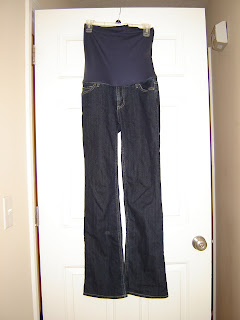 More on these, later.
Update: You can see the post on these, here.
Posted by Nicole {September Sweetheart} at 9:59 PM